How To Shop For The Perfect Towel Rail

For a long time, having a towel rail in your bathroom was seen as quite a fancy thing. There was even a slight novelty in the idea that you’d be able to replace a big bulky radiator with a sleek new vertical radiator which doesn’t take up as much room. Oh, and there was also the fact you could hang towels on it to get them toasty coming out of the shower. What a delight indeed.

Nowadays, towel rails are commonplace in bathrooms and other spaces across the UK. In fact, it's now quite odd to walk in a bathroom which just got renovated and not expect to see a towel rail. For some people, the change from an old white radiator which has seen better days to a new towel rail is slightly daunting, considering the fact that apart from what they do, they’re essentially two completely different looking things.

So what can someone looking to buy a towel rail do to ensure they don’t mess it up and end up with an oddly fitting rail in their home? Here is some helpful advice I hope will see you buying a rail without a hitch.

A bit like your preferred choice of frozen chips in the freezer, so you prefer straight cut instead of curly (curved in this case).

The shape of the towel rail is the first thing you’ll want to think about. A straight towel rail will sit flush the wall with the centre/connecting rails thinner than the columns at either side. A curved towel rail (which can be seen by having a look at some of the great choices from Trade Radiators here) will have a curve in the connecting rails and a slight bend which is more noticeable when light hits off it.

Some people prefer curved as they think it’s easier for hanging towels on. Some say straight works best as you can jam a towel no problem. I think it’s a case of personal preference.

Width is really important when switching from a regular radiator to a rail. If you have a long radiator (anything over 600mm long) and feel a slim rail is a suitable replacement, you’ll have to factor in pipe centres and distance, or else you'll have a rail you’ll never be able to install.

In most cases, you’ll find rails which match length, but it is common to pull up the floorboards and readjust your pipes underneath, rather than move everything under the floor around.

You might think you want a rail which will go the whole way up your wall, but it won’t make any sense if you don’t know which height suits your room. For example, while a wall-length rail might look good in an office or boardroom, it will look too cumbersome in your ensuite or downstairs toilet. Get one which sits at around the same height as other fixtures in the room (the top of your shower for example) to stop it looking wildly out of place.

Do you know how much heat is required in a room? There is a way to do it, and that’s by calculating the British Thermal Units (BTU) needed to heat any size of space. You don’t need to be an engineer to work it out. If you search for “heating calculators” online, you’ll find sites where you enter the dimensions of a room, and it’ll tell you the exact BTU number needed.

Take that number and use it to find a towel rail which states in the product description it can easily reach. It helps stop you from buying a giant rail that wastes energy or a small one that can’t for the life of it heat your room.

You’ll be surprised to learn that there’s a whole world of colours to choose from looking at what finish you can have on a towel rail. Chrome, silver, polished, grey and the like might all sound like the same colour, but they’re entirely different.

It would be best if you thought about whether you want a really shiny towel rail that pings light off of it or need a more muted finish which blends in with other fittings in your room. The last thing you want to do is buy a rail which hits all the marks but sticks out like a sore thumb because its colour is completely off compared to the rest of the room.

I hope you found this article handy and it helps when you’re about to buy a towel rail for the first time.

Wow! How To Shop For The Perfect Towel Rail 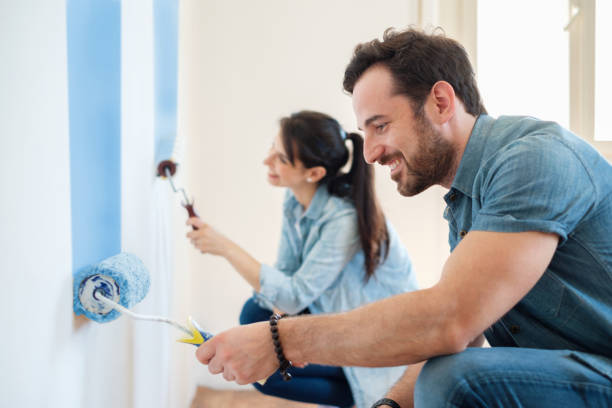 Why Trade Paint Makes a Difference

How to Achieve a Functional Home Office on a Budget